Our first schedule rally at County Hall had to be cancelled due to bad weather so White Water Club Site was our first rally ran by new marshals Derek & Joanne Brown assisted by John & Joan Costello and a great job they did.

Unfortunately Redcar was the last rally before lockdown.

We lost our Easter rally where we were going to have professional entertainment but we plan to do that again next year.

Bank Holiday rallies and our Holiday Rally at Upper Largo were also lost but as you see on your 2021 Rally Programme we plan to go to Upper Largo next year along with Holiday Rallies  at Ambleside Rugby Club, York, and Bedale.

The Chairmans Rally was also a casualty to lockdown and we plan to carry forward the chosen charity for this year which was (IF YOU CARE SHARE FOUNDATION ) to 2021, we will also be arranging the Charity Sponsored walk at Seaburn.

Another big rally we lost was the Sunderland Airshow but again we will be back there again next year.

We finally got permission to rally from C.A.M.C. on the 1st August and that was one month after they opened up the Club Sites, I believe this was totally unfair and I will be bringing up this issue at the next Regional Meeting , along with the fact that we were stopped Rallying again later in the year but Club sites remained open.

Our first rally was at BEDALE in North Yorkshire where 25 vans were in attendance and relieved to be out .

From then onwards until the end of the season our rally Programme has been severely disrupted as some Rally Marshals weren't comfortable as they had been shielding and some landowners didn't want us to rally on their land and we fully understood, we had to keep safe and we fully understood anyone vulnerable may not have wanted to rally.

We did manage to go ahead with our Holiday Rally at FLEETWOOD with 20 vans in attendance, we had visitors from Scotland, the Midlands and Hull as well as members from Durham Centre which was very pleasing.

The rally was run by Sharon & Kevin Showler and Barbara & Dave Burnside and under very difficult circumstances with social distancing etc, they did a great job and we all thoroughly enjoyed it, the only fault I had was they must arrange better weather for future rallies .

We also managed to arrange a new rally at The Mayfair Suite in Seaton Carew for August Bank Holiday to replace THORNTON WATLESS which again was well attended and then we managed to arrange a last minute 5 day Holiday rally at Bedale and 14 vans enjoyed the break, including visitors from Scotland.

All in all your Officers & Committee have done their best to pick up the rallying where we could to get us back out again, but unfortunately after our rearranged rally at HEIGHINTON in September we had to cancel our rallies due to local restrictions in County Durham and advice from the C.A.M.C. although the C.A.M.C. as I have previously mentioned did not close their own sites down.

The measures we took for members safety and well-being went above & beyond Government guide lines and we were confident that all members were safe, we even sent to head quarters a full risk assessment for each rally as was requested.

At this stage I would like to thank Colin Smith for all the hard work he has had to do in keeping the website up to date, also Dave Wilson who has tried his best swapping venues around trying to get us rallying again.

Dave has decided to step down this next year from the Rally Secretary's position and I would like to thank him for all the hard work & dedication he has given to the Committee and Durham Centre, hopefully along with Mary they can continue to rally for many years to come .

Someone else I would like to thank is Dave Morgan, Dave has had the difficult task of either returning monies or swapping rally deposits from cancelled rallies to rallies that have been able to go ahead which has been no mean feat.

As things stand at the moment there are still members who have money in the rally marshal's account that have either not contacted Dave or he has been unable to contact them, if this is still the situation by the end of our financial year

31st December all monies remaining will be donated to the centre.

For the foreseeable future all rallies must be paid for in full prior to the rally, either by Cheque or preferably by Bank Transfer when booking the Rally as we still cannot handle money.

The new Rally program will be on line from Monday 2nd November for you to book Rallies, if we as a Centre have to cancel Rallies for any reason a full refund will be applicable.

Another person leaving committee this year is Bernadette Smith and I would like to thank her for her contribution to Committee  for the last 10 years especially the last year as Vice Chairman, although she is stepping down I am sure she will be around to help for many years to come even if its just to keep Colin right.

I would like to thank all the current committee for their hard work and dedication over the last 12 month, and all centre members for their support of Durham Centre .

Today is the end of my 3 year reign as your Chairman, although it has been challenging it has been very enjoyable and the highlight of it all being DURHAM CENTRE celebrating our 60th anniversary and it was a very proud moment for Angela & Myself overseeing such a great occasion with the help from a great committee and support from centre members, also I couldn't have done it without the support of Angela for which I thank her.

As nobody has come forward to fill the Chairmans vacancy the committee have asked me to continue for another 12 month's. As long as you the members have no objects for me to continue , I have agreed to do this and help our incoming Vice Chairman to learn the position of Chairman.

Once again thank you for your support and I hope together we can keep DURHAM CENTRE going forward. 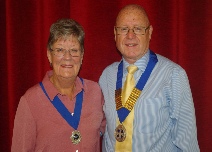